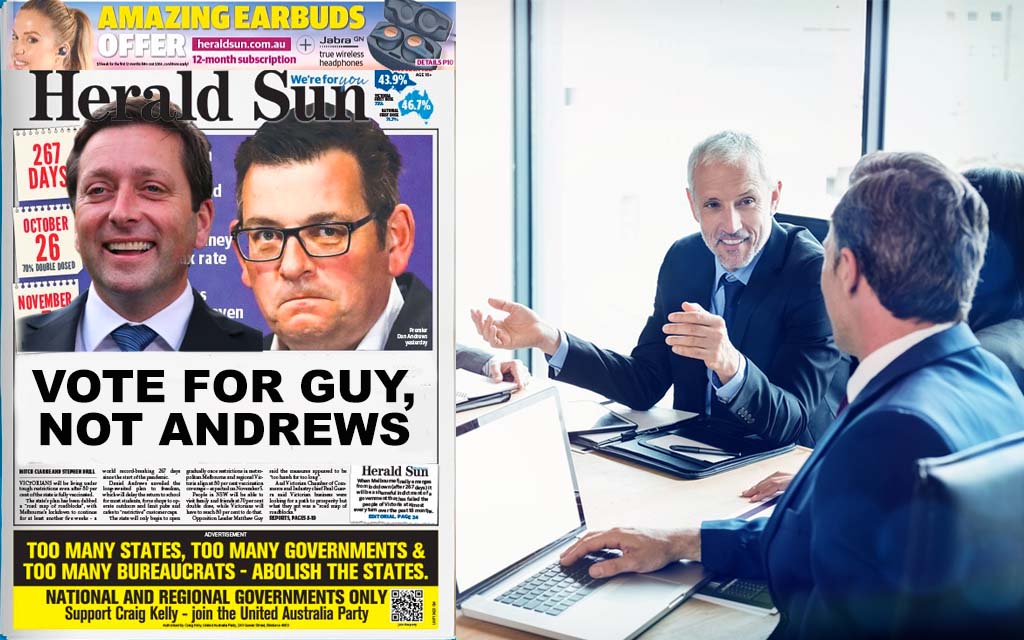 The Herald Sun might be getting desperate, it can be confirmed.

This comes after Victoria’s most widely read tabloid has spent months going to extreme efforts to vilify Dictator Dan Andrews while at the same time suggesting that Matthew Guy doesn’t always wear a tin hat to stop the 5G radio waves from eating his brain neurons.

Yet not even their obscenely biased propaganda has managed to shift voter sentiment, with the majority of Victorians belligerently sticking to making up their own voting minds.

That’s why the anxious Editor of the Sun has at 4.30am this morning decided to do away with the pleasantries and just come straight out and say it.

“Fuck it. Just tell them to vote for Guy, not Andrews,” he exclaimed while reviewing the draft front cover of today’s Herald Sun.

“No more dancing around it, I’m sick of the politics. Just literally print the words “Vote for Guy, Not Andrews’ in big ol’ font. Capital letters all.”

“Can we even do that?” asked a naïve intern who has not yet worked at the Murdoch Press long enough to lose all sense of journalist integrity.

“Call it an opinion headline,” the Editor said flatly. “And Jenny?! Where’s Jenny?” the Editor surveyed the room of Murdoch lapdogs.

Jenny, the team’s graphic designer, was sitting at the far end of the meeting room table. “Here, sir,” she replied.

“Jenny, can you Photoshop Guy to look a bit more trustworthy? Like, fix his shit eating grin, and maybe cut off the sleeves of his suit jacket and replace with some nice big tanned muscular arms or something?”

Jenny nodded hesitantly. “Sure, I suppose.”

“And with Andrews’ ugly mug,” the Editor poked the image he had of Andrews on the table in disgust. “Can we put some devil horns on him? And change the ‘Northface’ branding on his jacket to say ‘I Love Lockdowns’.”