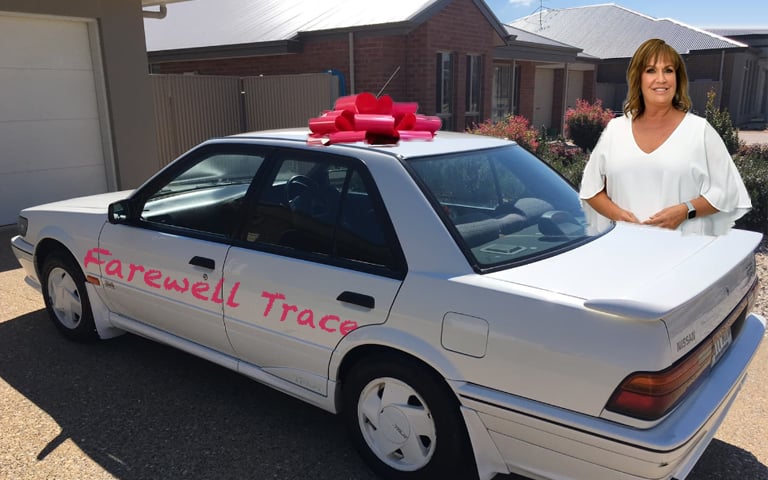 A pioneer of Australian investigative journalism, Tracy Grimshaw’s final episode of A Current Affair will air at 7pm tonight.

After 16 years hosting the iconic investigative news programme on Channel 9, the veteran journalist says she has no intention of returning to the newsroom in the near future. Instead, the 62-year-old media stalwart says she will ‘reset her work-life balance to purely life next year’ and is taking the entire 2023 off completely.

Through her tenure with ACA, Grimshaw has single-handedly brought down thousands of dodgy landlords, tradies and workers comp con artists – but it is her tireless work busting reckless hoons for which she will be remembered most fondly.

This legacy of keeping our streets safe from modified street racing vehicles was honoured today, as Grimshaw’s colleagues presented her with a farewell gift like no other.

A morning tea at the Channel 9 head office this morning finished with a surprise trip to the lead ACA cameraman’s house in outer suburbs, as the retiring journalist was blindfolded by her colleagues so as not to ruin the surprise.

“Oh my goodness. This is too much” said a giggling Grimshaw.

The team remained tight-lipped, before leading their departing anchorwoman up a pebbelcrete drive way.

“SURPRISE!!!” they all shouted, as the Producer’s Assistant untied the blindfold.

Sitting in front of her was a 32-year-old Nissan Pintara TRX, complete with slotted rotors front and back, lowered with low king springs, sports steering wheel, extractors and sports exhaust with pod filter.

Confiscated by the police after some crack reporting from ACA in the early 2000s, the producers had tracked down the vehicle to a garage, before putting a giant red ribbon on it.

“I remembered this one” said an emotional Grimshaw.

“It was causing hell for working families in Castle Hill. Circlework in cul-de-sacs at all hours. Episode 678, November 2004”

Her team begin to cry as well.

“It’s all yours Trace” said one makeup artist.

Tracey inspects the sound system. It’s still got the pioneer deck, splits , 6x9s, custom boot install with a 12 inch sub. She climbs into to the drivers seat.

“I guess these streets aren’t safe anymore” laughs Tracey, as she hangs the arse out the Pintara.