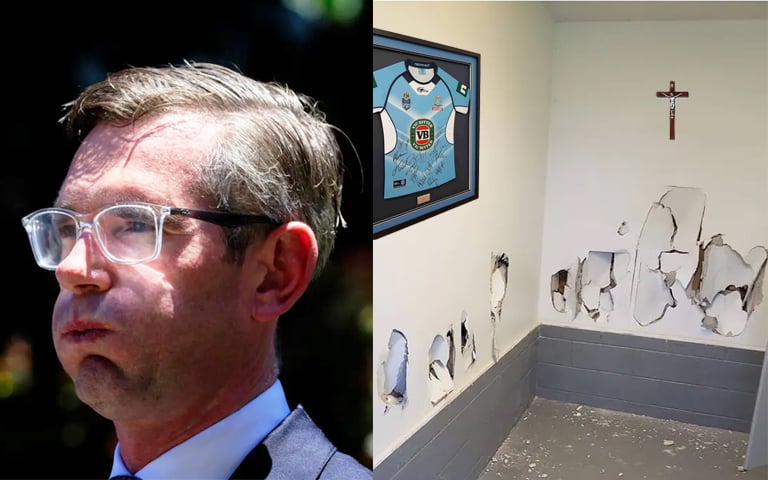 NSW Premier Dominic Perrottet has finally fronted the media today, after yet another bombshell was dropped on the parliamentary inquiry investigating the former deputy premier John Barilaro’s appointment to the state government’s wildly pointless position of ‘US trade commissioner’.

It is believed that Perrottet was avoiding all media as long as possible this morning, as the stink of the O’Farrell/Baird/Berejeklian circus continues wafting into his government.

However, with more and more dirt piling up – the embattled Premier has had to rip off the band-aid and show his face.

If true, the new allegations surrounding Barilaro’s conduct almost certainly gives the Morrison Government a run for their money when it comes to blatant corruption and the self-serving waste of public money.

Today, it was revealed that former chief of staff to John Barilaro had provided explosive written evidence to parliament claiming his ex-boss told him in 2019 he would create a position in New York to ensure he had a job to go to after he left politics.

It was job he ended up getting, with a $500k per year salary.

“He said, ‘I’ve just come from a meeting with Dom and Stuart regarding trade’,” Mr Connell wrote in his statement.

“‘And we’re going to bring back the Agent General in London as well as a bunch of other postings around the world’.”

The former chief of staff claims Mr Barilaro then added: “This is it; this is the job for when I get the fuck out of this place.”

In the statement Mr Connell said the conversation continued.

“I responded to Mr Barilaro and stated, ‘but John, the Agent General role will be filled well before you retire from this place’,” Mr Connell said.

“I’ll get them to put one in New York”

While Barilaro has unsurprisingly rejected the claims, as a retired politician, the microscope is no longer on him. Instead questions are now focusing on the former colleagues that remain in government.

Dominic Perrottet has today finally fronted the media, after spending about half an hour indulging in some therapeutic redecorating of the Premier’s office with sixteen fist-sized holes in the plaster wall.