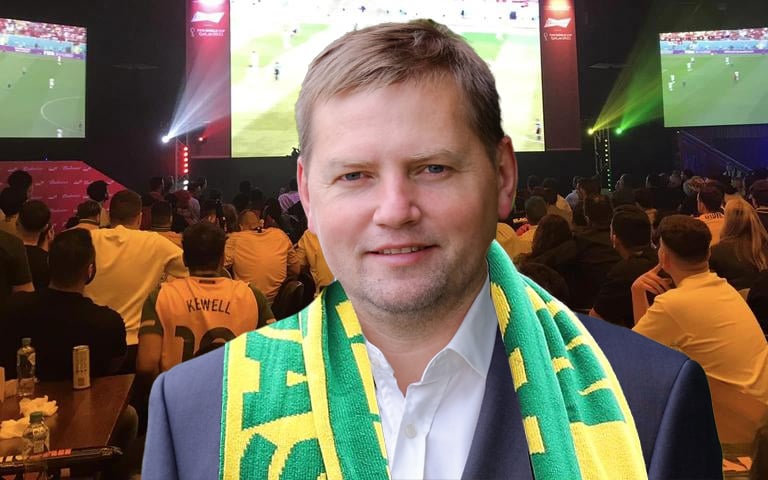 The Australian footballing renaissance is currently underway, as the national side continues to exceed global expectations at the 2022 FIFA World Cup.

The Socceroos have qualified for the Round of 16 after defeating Denmark 1-0 at Qatar’s Al Janoub Stadium, putting on a performance great enough for Australian media to begin using the word ‘football’ in their reporting, instead of the disrespectful s-word.

Australia will face Argentina next on Sunday, 4 December at 6am AEDT – in a showdown that even Lionel Messi has predicted ‘will be tough’.

The last time Australia qualified for the Round of 16 was during the glorious 2006 finals run after they achieved a needed draw against Croatia in the group stage.

And just like in 2006, the idling undertow of Australian soccer enthusiasts has re-emerged as a roaring fanbase of FOOTBALL DIE HARDS.

Australian Football administrators refuse to label this recurring wave of supporters as ‘a bandwagon’ and instead are encouraging everyone to get behind the green and gold, even if they only do it every two decades.

However, they is one small segment of the Australian sporting community that have been outright banned from cheering the socceroos as the qualify for the round of 16.

Former high school jocks who were once behind the sexist, racist and homophobic attitudes towards football exhibited frequently by many hometown bullies who thought the game was only for ‘sheilas, wogs and poofters’ – to quote the late great Johnny Warren.

In fact, anyone who has ever described the game of football as ‘wogball’ are also banned from taking part in any celebration of the socceroos recent successes, whatsoever.

This has ruled out swathes of new fans from the CBD sports bars across Australia’s financial precincts, as hundreds of thousands of once loyal Wallabies fans break out brand new yellow Socceroos scarves – after watching the All Blacks win almost every single match since the last time Australia made it this far in a FIFA World Cup.

Australian Soccer has made it clear that they refuse to be the back-up team for jaded Wallabies and AFL fans who cannot bring themselves to support those rugby league heathens.