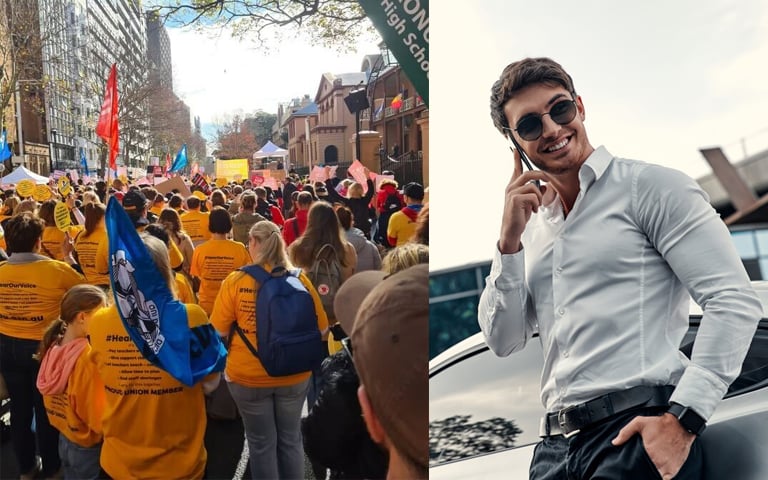 Thousands of teachers have today walked out of schools around NSW, and marched in protest across numerous cities and towns.

The disgraceful day of bludging comes as the state’s teachers greedily demand to be paid nearly half as much as a 22-year-old real estate agent, or a 29-year-old commercial lawyer.

The Marxist agitators attempting to bring the government down, claim that the 3% pay rise offered by the state’s generous leaders is an insult, and doesn’t even match inflation.

Teachers from public and Catholic schools have joined in unison, with widespread discontent in the sector about being overworked, understaffed, and underpaid.

Leaders of the protests told The Advocate that there were swathes of teaching shortages across the state because of poor conditions and pay, with the general public conveniently forgetting how tough teaching is after the last couple of years.

NSW Education Minister Sarah Mitchell has told teachers to pull their heads in.

“Who do these career teachers think they are,” said Mitchell today.

“Do they think they work in Real Estate or something?”

“It’s not like they are generating revenue for the economy, all they are doing is dedicating their lives to raising our children and trying to give them a decent education in the face of persistent underfunding.”

“Talk about getting a big head,” laughed the Minister who last year said teachers were “hell-bent” on hanging students out to dry for political purposes.

When asked why Mitchell didn’t think the state’s teachers deserved a tiny bit larger slice of the public pie, the Minister explained that money doesn’t grow on trees.

“It’s all well and good to just say people should get paid more, but the money has to come from somewhere?”

“If we pay our essential workers more, how will we pay 25 million to put a flag on a bridge, 500,000 a year for John to live it up in New York, and hundreds of millions on pork barrelling grants?” she laughed.