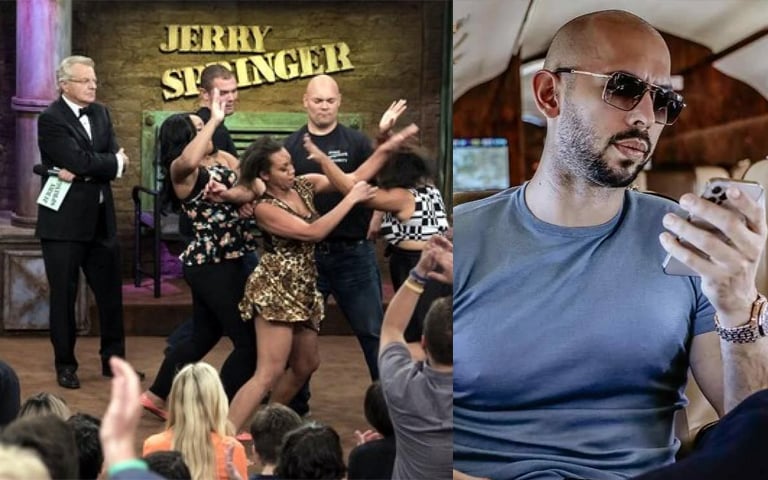 If you are lucky enough not to have come in contact with the latest flash-in-the-pan misogynist to go viral on TikTok, you might not be familiar with the newest wave of controversial opinions currently infecting the brains of young men who don’t know how to talk to women.

Andrew Tate, a former ‘mixed martial arts expert’ who has recorded 1 fight against a plumber in rural England, is making a name for himself on the dark corners of the internet as the natural progression for losers who took the very worst out of Jordan Peterson’s self-help doctrines.

According to Andrew Tate, women “belong in the home”, “can’t drive”, and are a “man’s property”.

The 35-year-old former Big Brother contestant claims that he only dates women aged 18 to 19 because he can “make an imprint” on them – and has relocated to Eastern Europe for this reason.

His social media presence has caused great concerns domestic violence campaigners around the world, as he racks up more online engagement than both Donald Trump and Kim Kardashian.

However, while these woman hating sound bites appear foreign, or even brave, to Gen Z incels – it still really doesn’t hold a torch to the shit that used to be on daytime TV before the invention of social media.

As parents and teachers around the country begin to grow worried that their sons and daughters are being exposed to dangerous ideologies that encourage hatred and abuse, there have been calls for one of America’s greatest political scientists to come back out of retirement to put Andrew Tate to the sword.

78-year-old former daytime TV host Jerry Springer has been identified as the only many capable of reigning in Andrew Tate and his hateful rhetoric – as the world realises that, despite it’s flaws, we need The Jerry Springer Show more than ever right now.

Airing 5000 episodes between 1991 and 2018, Guests on the Jerry Springer Show were everyday people confronted on a television stage by a spouse or family member’s adultery, homosexuality, prostitution, transvestism, hate group membership. These confrontations were often promoted by scripted shouting or violence on stage. By 1998, it was beating The Oprah Winfrey Show in many cities, and was reaching more than 6.7 million viewers.

However, in 2022, with no talkshow TV shows to ridicule the hateful opinions of people like Andrew Tate in front of a live TV audience with security guards on the ready – the closest thing we will get to Jerry Springer is a ‘balanced’ 3-hour interview of softball questions from the devil’s advocate, Joe Rogan.