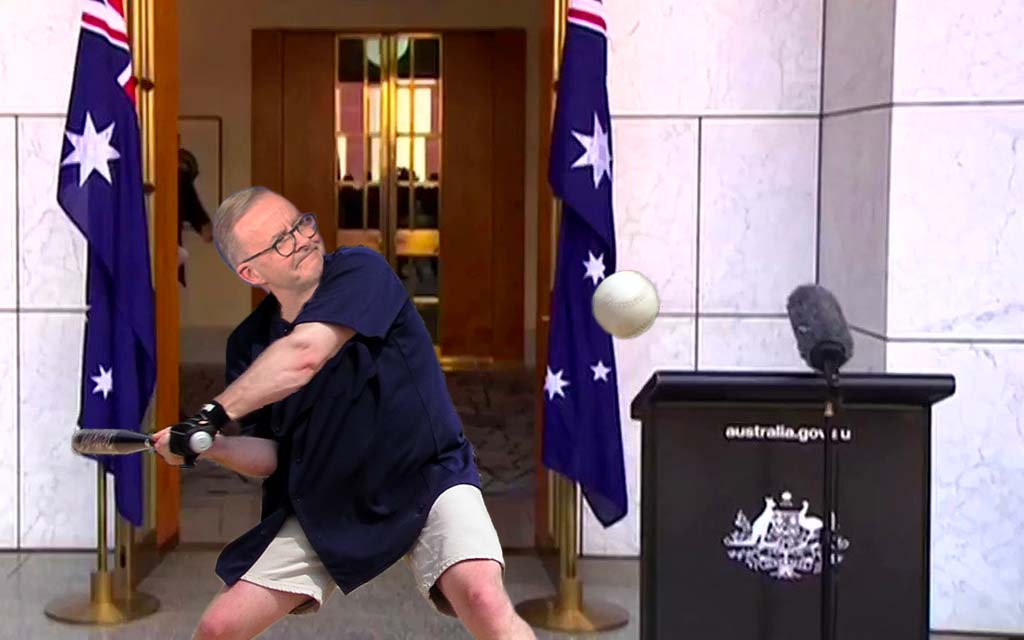 The nation’s no longer new Prime Minister has today revealed to The Advocate the golden week he’s enjoying.

After beginning to face a few questions about the bigger issues, Anthony Albanese says he’s been basking in the glory of the Side Hustle Scotty Saga.

“It’s been a gift from god,” said Albanese, twirling his bat before walking out to the crease to face another barrage of softballs.

“Scotty’s throwing up beautifully lofted softballs that I can just cream out of the Parliament house grounds,” he continued.

“And they are softballs, so I’ve been hitting almost all of them flush.”

The endless pitching of softballs comes as the world reacts to the secret nature of Morrison’s ministerial appointments, and the coverup that ensured.

The revelations have shocked many, with Albanese and the Labor party unable to believe their luck at the perfect set of circumstances they’ve been presented with.

“Obviously we are going to make it last for as long as we can,” said the PM today, provided with a perfect excuse to talk about the fact he is going to push through Stage 3 tax cuts which will cost the nation $184 billion and disproportionately benefit the top end of town and people earning over 180k a year.

“No one’s asking about the fact that our promise to lift stagnating wages has now been pushed back until the end of 2024 at the earliest,” said Albanese.

“Or what we are going to do in regards to new coal, gas and oil projects.”

“Or what we are actually doing about the housing crisis that is ruining the nation and forcing people into homelessness.”

“All people like you dumb regional journalists from Western Queensland want to talk about is silly old Scotty,” he laughed.

He then leaned back and creamed a gentle looping softball out onto the lawns of parliament house.